Should RE Agents Disclose Police Shooting Statistics to Potential Buyers?

Why are Mortgage Companies Making the same Mistakes Banks Made?

It’s Raining, It’s Pouring: How to Prepare for This Year’s El Niño

Survey Says Millennials are not a Generation of Renters

From The New York Times
By JIM YARDLEY
Published: September 24, 2010 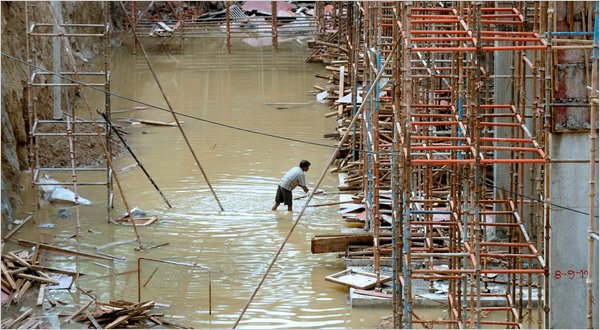 NEW DELHI — Had the statement come from a non-Indian, especially a Westerner, it probably would have been angrily repudiated as an affront to Indian dignity. But the offending words came from a top Indian official trying to deflect criticism for the bureaucratic failings and lax preparations threatening the coming Commonwealth Games.

The issue was reports of unsanitary conditions inside the athletes’ village, a facility promoted by Indian organizers as world class. Officials of the New Zealand team, arriving early, had been horrified at dirt-caked bathrooms and soiled rooms. The explanation offered by Lalit Bhanot, the second-ranking official on the organizing committee? Indians and Westerners have different standards of hygiene.

“These rooms are clean to both you and us,” Mr. Bhanot told Indian reporters this week. Foreigners “want certain standards in hygiene and cleanliness which may differ from our perception,” he said.

India had hoped the Commonwealth Games, a quadrennial athletic competition among nations of the former British Empire, would serve as a public relations vehicle to show off the economic progress that has made the country a rising power. Instead, the world is witnessing an ugly spectacle of bureaucratic dysfunction that only confirms the image of governmental ineffectiveness that Indian leaders hoped to dispel.

Indians acknowledge that sanitation is woefully lacking in many parts of the country. But Mr. Bhanot’s suggestion that their government cannot, even under the glare of a global spotlight, deliver a high standard of hygiene in an expensive new facility fueled broad public indignation that rippled through television talk shows and Internet message boards.

“It is unbelievable that a person holding such a responsible position can make such a statement,” said J. Anand, vice president of a New Delhi travel agency. “Hygiene is hygiene, whether it is in India or anywhere else. I feel embarrassed by that statement.”

The dirty bathroom controversy is just the latest problem to plague the games. New Delhi has experienced record monsoon rains, causing periodic flooding in low-lying areas and amplifying the seasonal outbreak of mosquito-borne dengue fever. Missed deadlines have officials racing to finish work, and a pedestrian bridge under construction collapsed this week, injuring 27 people. Already, as many as nine athletes have dropped out of the Games.

Now the photographic leitmotif of the games is filthy bathrooms. Snapshots taken of an apartment in the athletes’ village with dirt-caked bathrooms and toilets, a mattress stained with dog paw prints and a sink smeared with the spittle of chewing tobacco have ricocheted across the Internet. On Friday, two leading Indian newspapers ran some of the photos on their front pages.

The dirty conditions have prompted several teams to delay their arrival into New Delhi, with only eight days before the Oct. 3 opening ceremony. If the situation has been embarrassing, it mostly reflected the abysmal management that has plagued the Games; some laborers had used the rooms during construction, and housekeepers had failed to clean up on time.

Anyone living in India is inevitably confronted by squalor, whether the slums and shantytowns that exist in most cities or the beggars, often children, who tap on car windows for change. Few Indians would argue that poverty is not a paramount national concern, and many domestic critics of the games argued that the country was still too poor to spend so much money on what is effectively a government prestige event.

Mr. Bhanot’s comments hit a raw nerve because many middle class Indians make a distinction between public and private standards. If public bathrooms in government buildings are usually dirty, private homes are usually immaculate. Most people pay close attention to their appearance and cleanliness, even as public roads are usually potholed and public buildings are often not well maintained.

“It’s not that somehow people don’t recognize the truth that there is a problem about public standards of hygiene in India,” said Pratap Bhanu Mehta, president of the Center for Policy Research in New Delhi. “But usually we have dealt with it by confining it to the public space. We think private standards are very high. And he seemed to be questioning that.”

Mr. Murugesh worried that clients, having seen the controversy over the athletes’ village, would now wonder: “Is that how I’m being served?” He jokingly added: “I just wish they had outsourced it to us.”

The irony of the cleanliness controversy is that the bathrooms in the athletes’ village represent the sort of luxury most Indians never experience. The walls are made with marble, and the sinks and toilets appear equipped with expensive fixtures. For much of India, the lack of access to a toilet and the absence of adequate sanitation are widespread problems blamed for the spread of disease as well as the contamination of the country’s rivers and other water sources.

Bindeshwar Pathak, founder of the Sulabh International Social Service Organization, has spent 40 years promoting the need to expand sanitation in India. His group has placed more than 1.2 million household toilets around the country and operates a toilet museum in New Delhi to promote awareness about sanitation.

Meanwhile, the effort to scrub the athletes’ village moved into extra high gear on Friday. Prime Minister Manmohan Singh ordered organizers to intensify cleaning efforts at the village immediately, while the Indian news media reported that the government had asked several of the country’s elite private hotels to complement the cleaning effort.

Athletes trickling into the city were reportedly being put up temporarily in hotels, though international sports officials, who have blasted the lack of preparations, sounded more optimistic on Friday.

“Conditions at the Commonwealth Games Village are acceptable,” said Perry Crosswhite, head of Australia’s delegation, according to The Associated Press. “Things are getting better every time.”

For his part, Mr. Bhanot has backpedaled, trying to argue that his comments were taken out of context. But he is not the only local official who has offended the public.

When the hurriedly built pedestrian bridge near the main stadium collapsed during construction this week, a senior official, Jaipal Reddy, tried to dismiss the accident as a “minor matter,” even though many people thought it symbolized the risks of delaying preparations until the last minute. Sheila Dikshit, chief minister of New Delhi, also initially described the collapse as “minor.”

The Times of India ran photographs of the dirty bathrooms on Friday and denounced the “criminal unconcern” of games officials. “They must be made to pay,” it blared, “so that India’s name is not dragged so willfully into the mud ever again.”

Is The Disclosure Source NHD Report Scaring My Buyer?

Are Agents Being Set Up to Violate RESPA?