Policymakers at the Federal Reserve are prepared to accelerate the Fed’s timetable for tapering its support for mortgage markets if inflation continues to run higher than the their objectives.

Minutes of the Federal Open Market Committee’s last meeting released Wednesday reveal that some policymakers are worried that the current plan to phase out the Fed’s $120 billion in monthly debt purchases by June is too cautious.

Inflation hawks on the committee want to accelerate tapering in January, which would give the Fed leeway to start raising the short-term federal funds rate before June, if needed.

During the pandemic, the Fed has been buying $40 billion in mortgage-backed securities, and also boosting its holdings of Treasurys by $80 billion a month, helping keep mortgage rates near historic lows.

Although fears of inflation are now on the rise, Federal Reserve Chairman Jerome Powell has said he wants to wind the Fed’s asset purchases down before raising short-term interest rates, which are traditionally the Fed’s most powerful monetary policy tool.

At the conclusion of the Federal Open Market Committee’s last meeting, which wrapped up on Nov. 3, Powell outlined a timetable for tapering the Fed’s asset purchases by $15 billion per month, starting in November. At that pace, the Fed would be done tapering by June.

Fed policymakers said they were committed to keeping that timetable for two months, but that the pace of asset purchases could be adjusted in January if warranted.

Meeting minutes show that “some participants” suggested that more rapid tapering “could be warranted,” and that “various participants” agreed that the committee “should be prepared to adjust the pace of asset purchases and raise the target range for the federal funds rate sooner than participants currently anticipated if inflation continued to run higher than levels consistent with the committee’s objectives.”

But because of “continuing considerable uncertainty” about the course of the pandemic, including supply chain issues and production logistics, “a number of participants stressed that a patient attitude toward incoming data remained appropriate” to allow for careful evaluation of implications on the labor market and inflation.

The bottom line is that the committee “would not hesitate to take appropriate actions to address inflation pressures that posed risks to its longer-run price stability and employment objectives,” the minutes said.

While some inflation hawks say the Fed has gone too far in trying to prop up the economy, Powell got a vote of confidence this week from President Biden, who nominated him to serve a second term as Fed chair.

Powell has “provided steady leadership during an unprecedently challenging period, including the biggest economic downturn in modern history and attacks on the independence of the Federal Reserve,” Biden said.

Yields on 10-year Treasurys, a key indicator of where mortgage rates are headed, stayed well below their Wednesday high of 1.69 percent after the release of the meeting minutes at 2 p.m. Eastern.

In a forecast issued after the Fed’s meeting, but before the release of the minutes, Fannie Mae economists said it’s likely that financial markets have already “baked in” expectations for Fed tapering, and that mortgage rates will rise only gradually over the next few years. 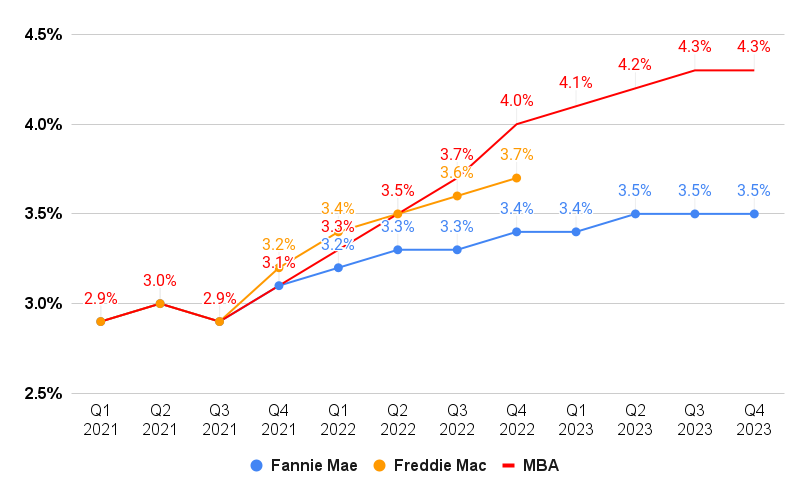 Fannie Mae economists see rates on 30-year mortgages hitting 3.4 percent by the end of 2022, and then leveling off at 3.5 percent during the last nine months of 2023.

Economists at the Mortgage Bankers Association think inflation may be harder to tame, and predict rates on 30-year mortgages will rise to 4.3 percent by the second half of 2023.