Rain and strong winds accompanied the arrival of an atmospheric river, shattering records in several cities

A huge storm surged south in California on Monday after flooding highways, toppling trees, and causing rock slides and mud flows across northern part of the state over the weekend. The state, which has spent months mired in a devastating drought, is expected to be soaked through Tuesday.

Santa Barbara county officials said the storm was expected to produce roughly 1in of rain per hour, threatening the newly charred coastal areas burned in the Alisal fire. Residents were ordered to stay in and lock their doors and windows or move to higher ground.

“A Shelter in Place Order has been issued due to the potential for life-threatening flooding and debris flows in the Alisal Fire burn area” the county of Santa Barbara wrote in an emergency alert on Monday morning as the storm arrived. An evacuation order had been in place since Sunday, but for those who stayed, the county said: “It is no longer possible to safely leave.” The system had already left flooding and flows in its wake to the north.Drenching rains and strong winds accompanied the arrival of an atmospheric river – a long plume of Pacific moisture – into the drought-stricken state, shattering records in several cities and pounding high elevations of the Sierra Nevada with heavy snow.

“It’s been a memorable past 24 hours for the Bay Area as the long talked-about atmospheric river rolled through the region,” the local weather office said. “We literally have gone from fire [and] drought conditions to flooding in one storm cycle.”

Through Sunday the National Weather Service (NWS) peppered the state with flash flood warnings as emergency crews rushed to evacuate towns hit hardest by the storm. Flooding was reported across the San Francisco Bay Area, closing streets in Berkeley, inundating Oakland’s Bay Bridge toll plaza and overflowing rivers in Napa and Sonoma counties. Power poles were downed and hundreds of thousands of people in the North Bay were leftwithout electricity.

The NWS called preliminary rainfall totals “staggering”. In just one day, towns in southern Marin reported more than 1ft of rain. Mount Tamalpais saw more than 16.5in of rain. “It looks like yesterday was the fourth-wettest day ever for downtown SF where records go back to the Gold Rush years,” the service said. It was the rainiest day the city had ever seen during the month of October.

About 150 miles to the north, the California highway patrol closed a stretch of State Route 70 in Butte and Plumas counties because of multiple landslides within the vast Dixie fire burn scar.

Hurricane-force winds also pummeled the region with gusts so strong it broke the equipment used to measure them in some cities. In the Santa Cruz mountains the wind was records at nearly 90mph and to the north trucks were toppled as they crossed bridges.

With thousands of unhoused residents exposed to the elements, officials in the Bay Area opened emergency shelters and organizations posted pleas for help for those whose tents were overcome by the storm. By Sunday evening, all 100 beds in a San Francisco storm shelter were full. A center opened at Sacramento City Hall was at also at capacity.

In some areas of the north bay people could be seen escaping their homes as the waters rose. Others recreated in the flooded streets. 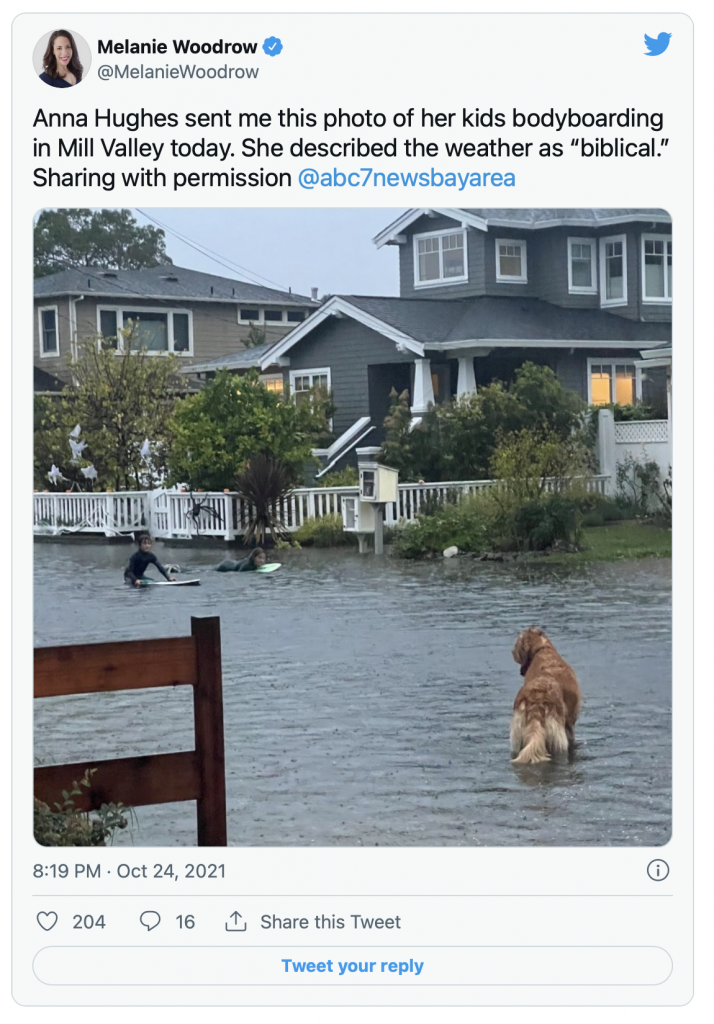 The same storm system slammed Oregon and Washington state, causing power outages affecting tens of thousands. Two people were killed when a tree fell on a vehicle in the greater Seattle area. Eastside Fire & Rescue responded to the scene of the fatalities near Preston, Washington, which is about 20 miles east of Seattle.

In California’s Colusa and Yolo counties, State Highways 16 and 20 were shut for several miles due to mudslides, the state department of transportation said.

Downtown Sacramento broke a record set in 1880 after 5.44in of rain hit the city in just 24 hours. Just weeks earlier, the state’s capital had set a new record for the longest dry-spell, with 195 consecutive days without rain – an event that had not happened for more than 140 years. California’s 2021 water year, which ended on 30 September, was the second driest on record and last year’s was the fifth driest on record. Before the storm, some of the state’s most important reservoirs were at record low levels.

The weather whiplash is extreme, but not necessarily unexpected. Climate scientists have warned for years that climate change would intensify weather patterns.

Still, it remains to be seen if the wet weather will make a dent in the drought overall, which has plagued California and the western US this year. California’s temperatures are rising. Because the state is hotter and drier rain and snow that does fall is more likely to evaporate and less likely to absorb into the soil. “It is worth noting that this exact situation – an extremely strong atmospheric river bringing brief period of record rainfall in midst of severe and temperature-amplified drought – is what we expect to see in California with Climate Change,” UCLA Climate Scientist Daniel Swain said on Twitter on Monday morning.But it wasn’t all bad news. Along with the damage, the deluge did some good. Initial reports show that the storm was strong enough to extinguish most of the state’s still-smoldering wildfires and elevate some sinking levels in reservoirs.

“NorCal experienced an extreme & in some cases record-breaking rainfall yesterday,” Swain said. “There were some flooding issues, plus debris flows in burn areas – but this single event was able to end fire season and (most likely) noticeably reduce drought severity in many places.”

Snag The Top Of A Towering 20th-Century Palace In Bilbao, Spain

Experts Forecast a Turnaround in the Housing Market in 2023